"German Dentistry" at 7 Observatory Street: the history of an outstanding street and observatory 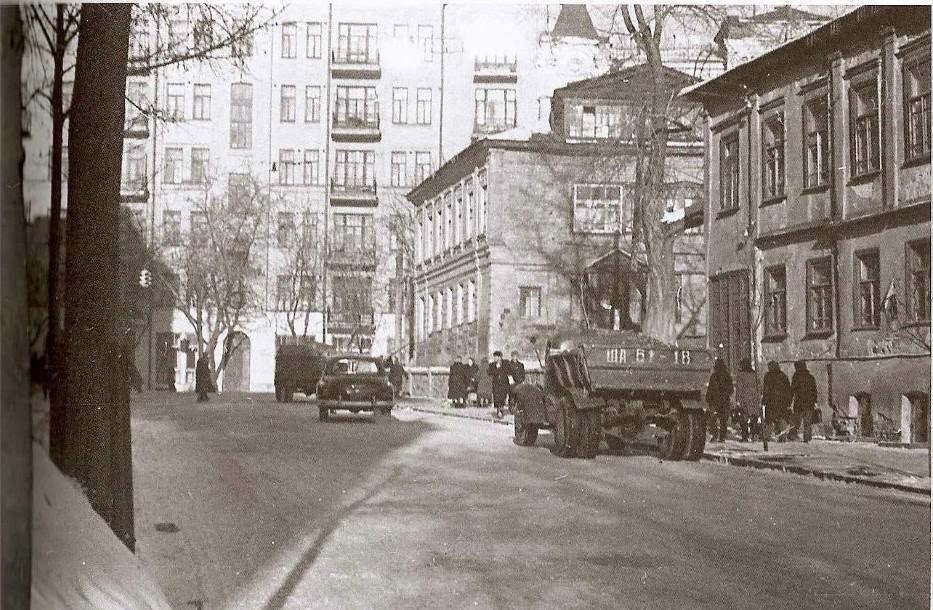 Our Kiev clinic is located in a cozy, quiet place, in the very heart of the city, but without unnecessary fuss and noise.

In addition to the spirit of noble antiquity, the Observatory has a certain sense of dreaminess, because it is here that you can look at the bottomless sky and wonder if we are one in the Universe ...

As it is known precisely in honor of the astronomical observatory Kiev National University named after Taras Shevchenko, which was built in 1841-1845, the street got its name in the middle of the XIX century... At first it was called Observatory Lane. 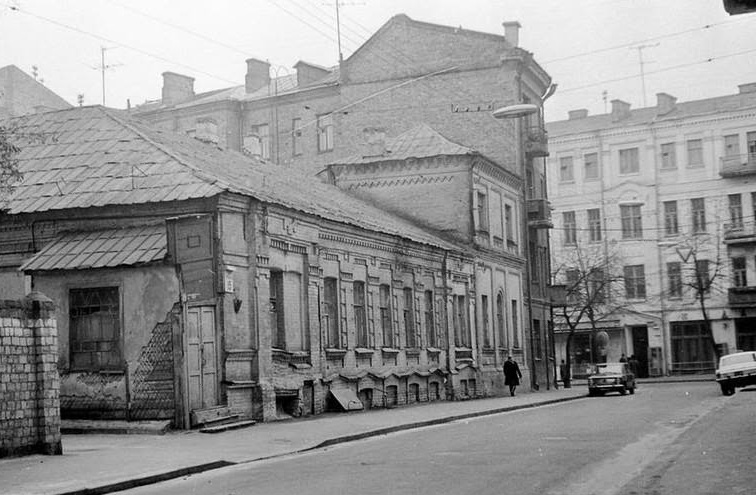 During the times of Kievan Rus, this area was part of the trade and craft settlement Kopyrev end. According to the chronicle, it was part of the Shchekavitsa hills, so some historians admit that the chronicle Schekavitsa is the very hill on which the observatory stands and that it was allegedly here that Prince Oleg of Kiev was buried in 912. 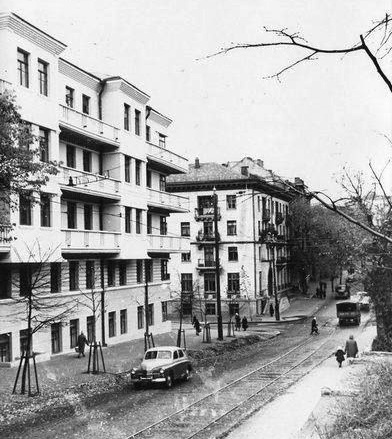 Intensive settlement of Lukyanovka, Kudryavets and, in particular, Observatory Street began in 1845 after a catastrophic downpour in Podil. In the 1930s, a number of constructivist buildings were built on Observatory Street.

The Kiev Observatory is one of the oldest university observatories in Ukraine, more than 150 years old. A museum has been created at the observatory, which can be visited to look at the collection of ancient astronomical instruments, as well as to admire the starry sky through a telescope. 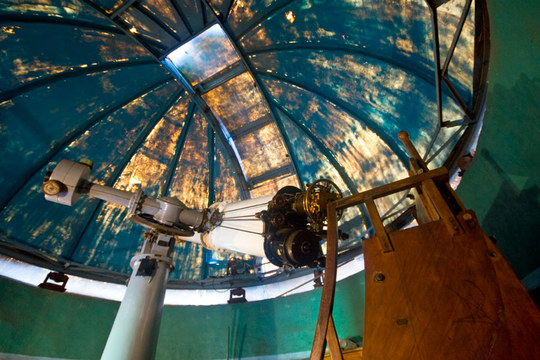 The decision to create the Kiev Observatory was made during the establishment of St. Vladimir's University (now Taras Shevchenko University). The area chosen for construction in those days was a suburb of Kiev, and the mountain on which the observatory was located was only 15 meters below the highest point in Kiev. The construction of the observatory, designed by Vincent Beretti, was completed in the winter of 1845. The 3 hectare site was lined with trees along the perimeter, which served as an additional barrier from city dust and lighting that interfered with astronomical observations.

During the construction of the tower of the additional telescope in 1860, the remains of the burial of a certain nobleman were found, there is a version that it was the grave of the famous prince Oleg, therefore the area where the observatory is located is sometimes called Oleg Mountain. 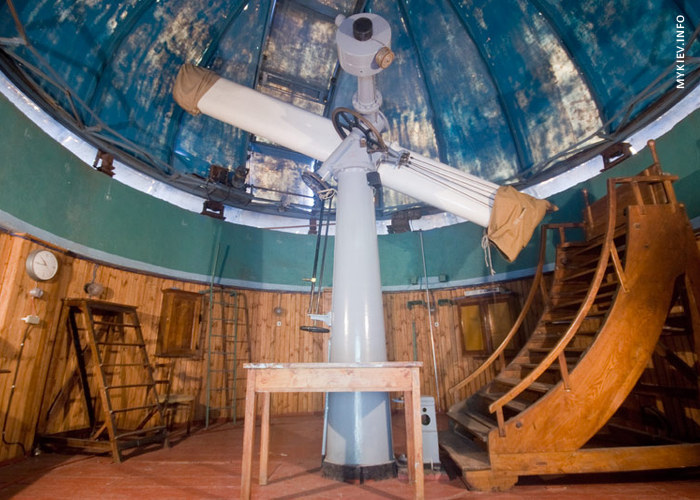 With the appearance of the observatory in Kiev, a precise time service was created. Once a week, every Tuesday, Kiev watchmakers came to the observatory to check their clocks with the astronomical ones, the correction for which was previously determined at night using special temporary stars.

In the 1920s, the observatory was equipped with a radio receiver, after which they began to clarify the time not using astronomical measurements, but by receiving radio signals that were transmitted by precise time services.

Astronomical equipment for the Kiev observatory was ordered in St. Petersburg and Europe. The meridian circle (a device designed to determine the coordinates of stars) brought from Germany in 1873 turned out to be of such high quality that the measurements begun on it in those distant times continued (with periodic modernization) until 1996. Now this device is in working order and is a decoration of the observatory museum. The first mechanical device, the Hippus chronograph, which recorded times on paper tape, appeared at the observatory in 1897. 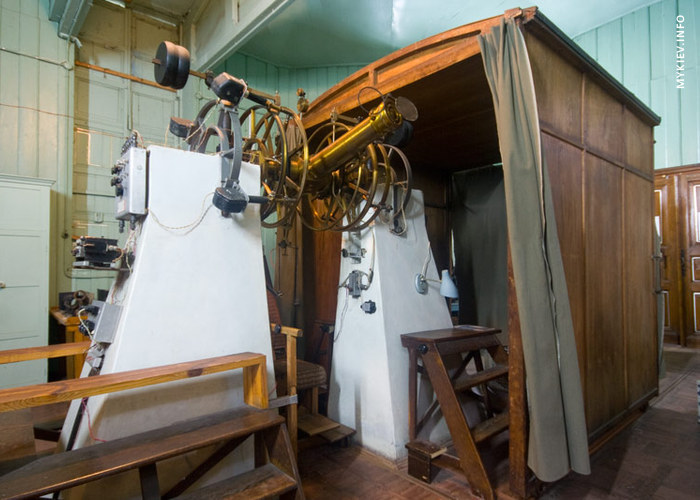 In 1897, the publication of the Annals of the Kiev Observatory in French began, which contributed to the strengthening of the observatory's prestige.

In Soviet times, the observatory did not bypass the terror of Stalin's repressions - the head of its geophysical department in 1937 was accused of espionage and shot. The director of the observatory had to resign and leave Kiev to avoid the same terrible fate.

In the first days of the Second World War, experts were still trying to conduct scientific work - the observation log kept records for June 25 and 29, 1941, these days Kiev was already bombed. Soon it was decided to evacuate the observatory - the most valuable equipment was sent by barge to Dnepropetrovsk, and from there by train to Ufa. The observatory returned to liberated Kiev in the spring of 1944. Fortunately, the explosions and shelling did not damage the buildings, although according to the stories of the inhabitants, long after the war, shells, cartridges and mines were found on the territory of the observatory.

Nowadays, with the development of information technology, many tools have ceased to be used and have become exhibits of the observatory museum. The observatory offers lectures and night excursions - everyone can look through a telescope at the Moon, Mars and even comets.